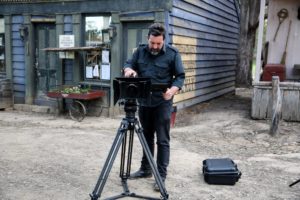 Jake worked at the Australian Broadcasting Corporation for 18 years on many of Australia’s most loved programs such as the 7.30 Report, the Chaser’s War on Everything, The New Inventors and many others. As a Television Producer and film maker Jake is very experienced in all aspects and genres of video production.

Jake has also produced several independent documentary programs most of which can be viewed for free on MerJa Media’s YouTube channel.

Jake is an accomplished, award winning photographer, conceptual artist, editor and video camera operator. He has published two books. “Hello American Spy” about his adventures in the People’s Republic of China while filming the acclaimed documentary “Which Way is China” and “Chaktomuk” four stories from Phnom Penh.

Jake conceived and ran the annual Sydney Body Art Ride event for several years, a moving rainbow made up of several hundred body painted cyclists that raised thousands of dollars for Children’s cancer research and acheived a Guinness World Record. He was also a collaborator on the controversial #4Horses of the Australian apocalypse project which culture jammed the 2018 Melbourne Cup.